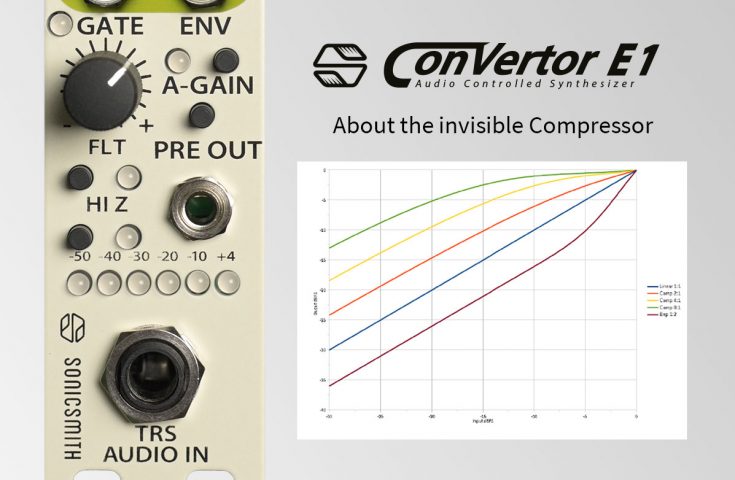 When you hear “upwards compression” you probably think about mixing the dry signal along with the same old, attenuation-based compressed signal. Personally, I think that in this case, calling it “upwards compression” is misleading because it’s not the compressor that is pushing anything up, but rather a function of the mixing outside the compressor. Parallel compression is a much better name, or NY compression if you’d like. But unlike all previous compression technologies which came before it, the ConVertor E1’s preamp compressor really amplifies rather than attenuates. The result is a compressor that is cleaner, simpler, faster, and zero-ripple. It also is basically a part of the preamp gain.

We designed the preamp with the Auto-gain part just to get an accurate gain setting in a short time. The gain can still be tweaked manually if you want, but if your hands are busy or you’re short of time, this is a lifesaver. So instead of having to manually adjust the gain while looking at the meter, we just need to press the A-GAIN button and play mildly loud for a second. It works faster and more accurate than a manual gain knob can ever be. It also gives the gain control longer life, because Just like relay switches, they don’t get the dust, dirt or suffer the physical abuse of their knobby counterparts. Auto-gain is a feature I have only seen in software before (Peavy Revalver VST plugin for example) but In Revalver, you better had your analog gain already set up in your actual preamp before your interface’s ADC. Otherwise, the VST’s digital auto-gain would have to over-compensate with a signal that may be clipping or is too weak coming in. So now we introduce an actual digitally-controlled, analog auto-gain that works much the same way it did in the plugin. Hurray! But something was still missing from the workflow. Personally, I almost always use a compressor before extracting the ENV 1:1. If we already have this remotely controlled gain, can we actually “ride” the gain in real-time? What about limiting the gain like its attenuation-based limiter to protect the ADC from clipping?

Dynamic Gain-Compression is a good description of what’s happening when you activate it. All previous compression technologies were attenuation-based. That’s why they all had an output gain control after their attenuation stage as compensation for the signal loss. So to compare them to our DGC we need to compare a combination of a preamp and compressor together since the gain is an integral part of this type of both the preamp and the compressor. In a typical recording scenario, we need to give our preamp adequate gain, then attenuate in a compressor then gain up again. Instead of the usual attenuation-based compression, our preamp’s gain does all the dynamics processing itself, with amplification rather than attenuation. That is why we call it “true upwards compression”. That fact alone already gives us a big advantage in simplification of the signal chain and thus introduces less noise in the audio path while keeping small footprint on the PCB. Instead of routing through 2 static-gain stages and attenuate in between them, we now only have that first gain stage without any attenuation. The gain is dynamic, according to digital feedback control and that can modulate to do all sorts of dynamics effects. it’s working via a digital ENV follower giving feedback to the auto-gain circuit on how much to amplify at a given cycle. That makes the minimum attack-time possible, a tiny part of a cycle, however, our attack time is based on when a pitch is recognized. That is also why the compressor sounds natural for all kinds of materials. All previous compressors inflicted 2 main artifacts: noise and ripple (AKA distortion). The noise was added when you turned the gain up (at the preamp) then attenuated (in the compressor) and then gain back up for the lost signal, bringing up all sorts of noises to the signal’s integrity. Ripple distortion happens when the ENV follower is constantly controlling the attenuation which distorts the attenuated waveform with total disregard of the input’s phase. In contrast, our new DGC only changes the gain at 0 crossings because it’s aware when the input hits 0. That means that there are no amplitude changes until the signal hits a 0 crossing. That is why no inharmonic noises were added (rippled waveform). When amplitude changes happen during 0 crossings it’s virtually inaudible thus the compression ripple is inaudible as well 🙂

I can say that this preamp is far more than just a good primer for pitch tracking. Since Sonicsmith’s focus is on workflow and desktop space, I wanted to make the most out of that half-6HP module. The preamp of the module may seem like an oversight but when you hear the results, I can totally see musicians could start using it for multi-tracking. I can testify that the hi-Z mode sounds brilliant, giving you 2M Ohms, the transients and frequency response are at a level I only heard from my guitar amp before. Add to that, the low noise, variable HP filter, and the compressor-limiter and you got yourself a real studio-featured preamp. We don’t expect you to replace your “character” preamp for this because the ConVertor’s pre is very clean sounding. But for direct recording of guitars and bass into my DAW for plugin amp-sim, I would gladly stick with this pre at hi-Z for the rest of my life.

But how does it sound?

The sound of this DGC compressor is aggressive. it’s also very loud because as you can see in the graph, the auto-gain is pushing the dynamics up towards the top of the dynamic range instead of the bottom like its old school colleagues. In fact, at 3:1 it’s already obvious and enough for most situations. The auto-attack and auto-release are doing their work well and there are no complaints there but we are yet to try out the higher ratios as we are waiting to hear those ratios from the new version of the firmware in about next week so stay tuned. The limiter is there simply to not let the input signal clip the ADC but again, it’s not an attenuation-based limiter. It’s the gain-limiting that simply backs off the gain when that happens. It’s a feature that our past recording engineers would have dreamed about in a recording situation but never thought this was a possibility. Mostly because it wasn’t! I found the sound of the DGC compressor pretty characterful in a good way. But you can tell us as you receive your units.