Why the ACO100 turned into the Digital ACO160

How the ACO100 evolved to become the DACO160 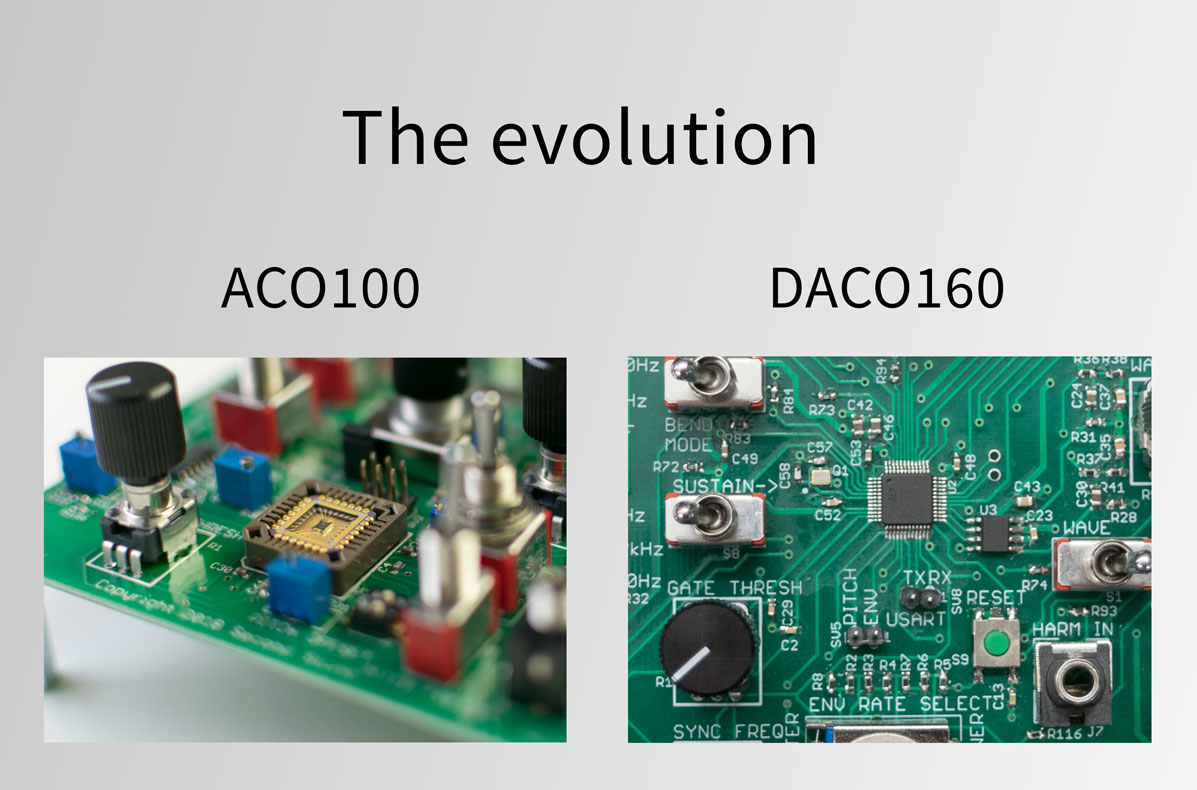 With more than 6 years of experience, we continue to master pitch-tracking devices and the workflows around them. Only this time, the new ACO160 goes digital.

The process of designing a chip was long, expensive but very gratifying. The ACO100 was undoubtedly the fastest pitch tracking solution possible, and since we released our 1st generation products, it gave us the rare opportunity to test different devices, circuits, and configurations around it to see what works, what’s desirable and what’s redundant.

In this article, I wanted to share some of our thought process with you and the conclusions that are leading me in designing the upcoming E1 series (yes they are coming soon). Staring with what worked and what was left to be desired in the ACO100 chip.

The improvements and the canceling of the ACO160 ASIC

Some aspects of the ACO100 tech could be improved right away. For example instead of detecting input 0V crossings, now the ACO160 is measuring the positive and the negative peaks. That allows much “cleaner” reading without having to measure false frequency during quiet passages (noise). The biggest improvement is in the active 2nd harmonic rejection. As some of you may know the 2nd harmonic is the loudest one (sometimes even louder than the fundamental) thus, the common practice is to resort to filters in order to make the fundamental frequency the dominant one. The use of filters can improve pitch detection but also imposes its own limitations and artifacts. For example, filtering the input source with a low pass filter, as is in the MS-20 and our 1st generation of synths can limit how high the player can play until the filter cuts off his audio completely. In our 2nd generation, the + versions, we registered a subsidiary patent called the auto-filter, which constantly tunes its own frequency via feedback from the ACO100 and doesn’t use cut off filters but rather it uses a high shelf attenuation and a low shelf boost tuned together. Even though it did improve detection greatly while allowing the musicians to play as high as they wanted, it did require additional circuitry and caused a bit of phase-shift. Now with the ACO160 the need for an input-filter completely vanished. Detection is so good, it’s even better and faster than the + versions. Another huge improvement is the inclusion of the (musical) ENV follower inside the chip. That allows us to auto-tune the decay of the ENV follower according to the currently detected frequency. That not only saves us the additional circuitry previously required to make an external ENV follower, but also avoids having a constant decay like most analog ENV followers and thus avoid the ripple noise associated with it. One last improvement is pretty dramatic, the inclusion of a digital 16bit pitch output. Such output can be translated instantly and perfectly into MIDI and not suffer any calibration, latency or tuning issues that happen when trying to turn CV into MIDI. Also having those digital pitch and ENV at 16bit means it’s MIDI 2.0 ready.

All those improvements (and a few more) were pressed into the ACO160 prototype ran and tested successfully. So why did Brian not press on with making the new version of the chip happen? Cause it wasn’t enough 😉 By then, it was obvious that the cost of prototyping, manufacturing and not to mention the design software licensing was getting into none sensical territory and the benefits of a hybrid ASIC started to be shadowed by the endless possibilities of emulating the ACO160 algorithm in digital firmware. At that point, Brian figured out a way to code the algorithm of the ACO160 without using FFT nor auto-correlation like most manufacturers. Keeping the FLL technology allowed for ultra-slim and efficient code while being able to take all the advantages above while keeping the ability to add features if needed in the future. And yes, latency is still one cycle of audio.

It was my privilege to have tested and consulted Brian all through the process to be confident the technology now is really solid and rich enough to offer a gigantic leap to musicians and their workflow. Since the implementation of the digital emulation of the ACO160 (called the DACO160) several enhancements were added. My favorite one is the automatic gain circuit in the preamp. That allows us to not only track the input level to accurately set the input gain but also all sorts of dynamic processors that we had to patch externally like analog compression and limiter. The added features will probably make you wonder how did we work previously at all. Kind of how one can think of modular synths vs. plugin synths. It’s THAT big. Just to give you an idea of the difference in workflow: the user now doesn’t need to worry about setting sensitive gain and wonder if he did a good enough job. No worries of clipping the input as well cause of the built-in limiter. No need to patch additional compressor cause there is one built in the preamp, less need now to add other oscillators as the enhanced oscillator capabilities and sound quality makes this sound engine extremely versatile and an attractive synth part in its own right and the digital connectivity allows us to have MIDI out and even input. Last point but not less important to the smooth workflow: because the ENV is all digital now we can have a separate compression setting for the ENV alone.

Audio, CV and MIDI walk into a bar…

Quite a few users tried to use our products to turn audio into MIDI through the intermediate stage of CV. That path might be problematic because CV in itself has no real representation of absolute pitch. The ACO160 includes a digital pitch output so with that 16bit data stream and a small addition of code, it’s fairly easy to get accurate MIDI commands representing actual real-life frequency value. Not only that, but with digital input the oscillator can work completely like a DCO.

Ever since Brian has left Sonicsmith in late 2018 I had both the freedom to design my own products but also the continued pleasure to work with him further as a tester and licensor of the technology. Will it make good business sense to invest in low-level FLL while the whole industry is using stronger and faster processors with larger buffers to run FFT analysis? Time will tell. Read my next blog post on our upcoming Eurorack products. They can easily fill up a few articles by themselves.