Sonicsmith goes full Eurorack with the E1 series After more than 2 years of development, the upcoming ConVertor E1 is not going to be just a long-awaited import of the ConVertor ACS into the Eurorack format. It’s literally a total redesign in every possible way. Designing a product from the ground up is a long… 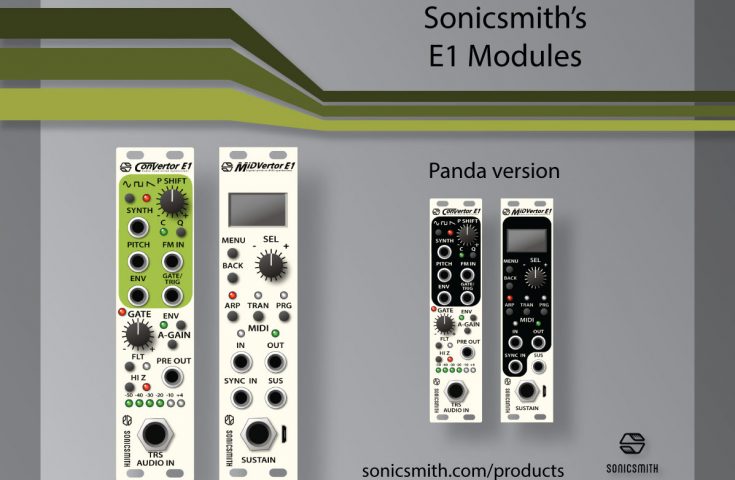 After more than 2 years of development, the upcoming ConVertor E1 is not going to be just a long-awaited import of the ConVertor ACS into the Eurorack format. It’s literally a total redesign in every possible way.

Designing a product from the ground up is a long process. More than 5 prototypes were made and we’re very happy that the latency, the 8-octave detection range, and the low distortion are preserved. However, I didn’t just want to design the same pitch to CV in a different shape or format. I wanted to tackle every single workflow challenges, technical glitches, tweaks, and user request we could. Read on to know how the E1 can change your expectations from Eurorack forever.

ConVertor grows with 0.25 the size to x5 the features

From the innovative preamp, compressor, limiter to the triple-controlled ACO, VCO and DCO-in-one, down to the “Sonicsmith Bus” connection, firmware updates and polyphony groups, the ConVertor E1 is a dream-like manifestation of what a modular Audio Controlled Synth can be. The best part is that because of its expandable design, a musician doesn’t have to pay for anything he doesn’t need. So lets first look at the most basic, bare-bones ConVertor E1 right out of the box, starting with its preamp.

The front panel design is meant to walk a user from the bottom upwards, where we can see the input plug: a TRS balanced/unbalanced connection for your dynamic mics/instruments/line-level sources. Followed by the HI Z button that can switch the Z between 10kOhm to 1M Ohm, if more signal juice is required. Next is the filter button (FLT) that switches the input 4-pole HPF from 25Hz, 70Hz to 140Hz with slightly boosting resonance. Up next is the A-Gain button. With +50dB of gain. The gain now is automatic so you can’t see any gain knob. Simply press on the button and play as loud as you need during the following 3 seconds. After 3 seconds the level is detected and the gain will be set for ideal headroom. Along with the A-Gain circuitry, you also get 2 dynamics processors that are so needed in such environments: 1) a brick wall limiter protecting the ADC from clipping and 2) an analog compressor with ratios of 2.8:1, 4:1 and probably more ratios will be available. The last control is the gate threshold knob with its encoder that can trim the threshold up or down in 1 dB steps. Now for the best part: All of those preamp settings I’v mentioned here along with all other ConVertor E1 settings will be saved along with your preset.

The ConVertor E1 also has a “Sonicsmith bus” connection allowing the connection of its digital outputs to be translated to MIDI via expansion module the MIDVertor E1. The MIDVertor E1 will also be able to control the ConVertor oscillator back via its MIDI input, in such MIDI control mode, the preamps of any connected ConVertors will act completely independent like any studio preamp, while the user can use a MIDI keyboard for a MIDI-to-CV or MIDI to DCO directly with all the other synth voice features of the ConVertor E1 such as the internal VCA, VCF, LFO’s and ENV gen.

Mainframe: from 50’s computers to your Eurorack

The 2nd E1 module we’ll be presenting is an open-source “musical mainframe” called the MIDVertor E1. The scope of the planned features really deserves a whole article of its own but originally it was planned to only give people a MIDI output option as some Eurorack users weren’t interested in MIDI at all, and I wasn’t going to make them pay for it.

Quickly I realized that to configure all the MIDI settings we’ll need a menu with a push encoder knob to make selections. Then I wanted to tackle the polyphony issue as solving it at this stage would be ideal. At this point, we invented the “Sonicsmith bus” which is a 4 pin ultra-fast, bi-directional data connection between the MIDVertor E1 and other synthesizers like the ConVertor E1. This connection allows transmitting the pitch, ENV, gate, sustain pedal and any other data we may need to make a compelling and intuitive musical performance from a ConVertor into the MIDI realm. But the “Sonicsmith bus” being bi-directional will allow the MIDVertor E1 to also control the ConVertor E1 back either switching its sound presets, updating it’s firmware, arpeggiating, modulating it’s sound engine or simply controlling the Oscillator directly via MIDI input coming from the MIDVertor E1 like a regular MIDI to DCO interface. We included 6 connections like that at the back (there is actually one extra for expansion so 7) that up-to 6 string guitar can be catered with 6 ConVertors to unify their MIDI outputs to one MIDI channel. It will be possible to split the MIDI channels across different strings and in MIDI control mode we’ll be able to gang different synths for a keyboard split operation. There is a USB connection for updating firmware and programming the MIDVertor E1 yourself with your own firmware. The source code will be hosted on Github so all you tweak-head programmers will be free to add/remove features, change the menu system, add indicators on the screen if more feedback is desired, or even just add animations on the screen when the synths are playing through it.

Audio to synth polyphony at last

Polyphony will be catered to anyone who can provide split voice outputs. As a guitarist, I obviously think of hex/quad pickups AKA “split pickup” split into mono outputs for your patching pleasure.

Personally, I think that active pickups are a bit overkill and I work with a local pickup manufacturer Hathor pickups here in Krakow who makes a really high-quality passive hex-pickup with a DIN-7 cable output. For that pickup, we have developed the Breakor E7 which is an 8 HP, passive, breakout module to split the DIN-7 pins into 6 outputs and will also provide additional two mixed outputs of strings 1,2,3 and 4,5,6 with separate mute switches for each string to include/exclude them from those mixed outputs.

Obviously the majority of “split pickup” owners are of the Roland GK series 13-pin active pickups and so far, I haven’t seen any Eurorack representation for those users. That why I’m happy that manufacturer Synquanon already developed an affordable 6 HP breakout module to match the size of our polyphonic set.

This 13-Pin input breakout module will be available for sale immediately so users will be able to choose between the passive DIN-7 pickup or the 13-pin GK pickups. Submarine pickups are also a vendor that agreed to give a 25% discount

All this goodness is expected to ship around November and the pre-sale will start in the next couple of weeks. Depending on the demand and user feedback this echo system can grow its features since all the microprocessors in those units are powerful enough to allow x4 expansion of features (by processing cycles). Let us know how you like the main-frame concept and if you think it should be expanded upon. Thanks for reading and see you in the pre-sale!